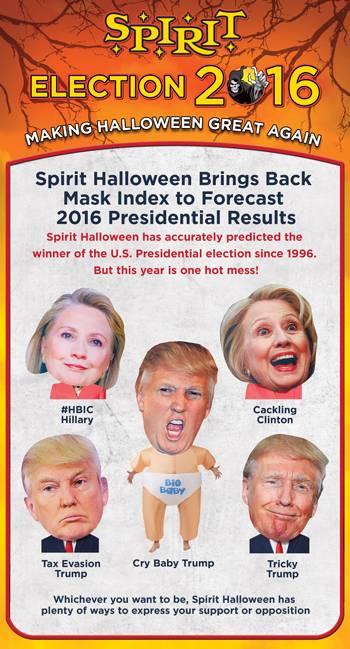 Egg Harbor Township, NJ, (September 29, 2016) — With an election year bringing more drama than a reality TV show, Spirit Halloween, the world’s largest Halloween retailer, is re-launching their famed Presidential Mask Index. Spirit’s Index has accurately predicted the outcome of every presidential election since 1996 based on their top selling candidate mask.

“With such a historic and eventful year in politics, we are eager to track the progress of our candidate mask sales as a fun comparison to more traditional polls,” said Steven Silverstein, President and CEO. “Spirit Halloween’s Presidential Mask Index is an exciting and spirited way to bring together two American traditions – Halloween and Democracy.” When asked about who he would be dressing up as, Silverstein refused to comment, citing political bias.

Inspired by the polarizing candidates, Spirit Halloween teamed up with Harris Poll to survey more than 2,000 U.S. adults, asking why they would dress up as either candidate this Halloween, given the choice between Clinton and Trump (chosen by 45% vs. 55%, respectively). Key findings include the following:

With approval ratings in the toilet, Spirit Halloween is rolling out novelty toilet paper printed with either nominee’s face, perfect for surprising party guests or even the most unsuspecting of neighbors, #mischiefnight. Spirit’s new “Roll Poll” will track which toilet paper is most popular among shoppers, offering a cheeky newcomer alongside Spirit’s flawless Mask Index.

Survey Methodology
On behalf of Spirit Halloween, Harris Poll conducted the survey online within the United States from August 24-26, 2016 among 2,047 U.S. adults ages 18 and older. This online survey is not based on a probability sample and therefore no estimate of theoretical sampling error can be calculated. For complete methodology, including weighting variables, please contact Madeleine Tabing 212.829.0002 ext. 124.

About Spirit Halloween
Spirit Halloween (spirithalloween.com) is the largest Halloween specialty retailer in the country with more than 1,200 locations in strip centers and malls across North America. Celebrating 33 years of business, Spirit is the authority on all things Halloween, offering one-stop shopping for everything from costumes to decor and party goods to accessories. In addition to being a fun and interactive event for shoppers, Spirit stores offer complete selections of costumes and accessories for infants/toddlers, children, 'tweens, teens, and adults along with exclusive decor you won't find anywhere else.