TV, Movies & Gaming
Clear All
Filter Items
By Size
By Price
By Color
By Ratings
Clear All
Look totally heroic in these official Iron Man costumes from Spirit Halloween! With adult and kids Iron Man costumes, you will look just like your favorite Marvel superhero. Show off your super strength when you dress up head to toe like Iron Man, complete with mask. Upgrade yourself from Tony Stark to Iron Man just in time for Halloween and you’ll be ready to fight evil and collect plenty of candy. Our realistic Iron Man jumpsuits will have you looking like the classic half man, half machine instantly. 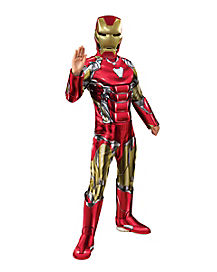 Are you ready to take on any battle that comes your way? Gear up with an officially licensed Iron Man costume and you’ll be the greatest superhero to walk the streets this Halloween. Step into Iron Man’s signature suit and accessorize with an officially licensed Iron Man mask and you’ll be getting calls to save the world in no time at all. The Marvel universe is nothing without you, so suit up and get ready for the most adventurous Halloween yet!

Our kids Iron Man costumes will have any little superhero feeling just like their favorite on-screen character! They’ll look like they’ve just stepped out of Avengers: Endgame or Avengers: Infinity War in these head-to-toe costumes that are totally powerful.

These are part of our wide selection of movie costumes that will make you feel like the ultimate hero.